Grace Kuch - Guitar, Lead Vocals
Eric Jones - Keys, Vocals
Laine Ford - Bass, Vocals
Jordan "Stixx" Jamison - Drums, Backing Vocals
Video by Peggy Jamison
The Grace Kuch Youth Band was nominated to represent the Colorado Blues Society at the 2017 International Blues Challenge in Memphis, Tennessee.  This band consisted of three young but fierce ladies of the blues including Grace Kuch, Laine Ford and Jordan “Stixx” Jamison.  Formed in summer of 2016 to prepare for the trip to the largest International gathering of Blues musicians in the world.  Competitors come from all over the globe and Youth are given the opportunity to showcase their talents during the week long event.

Grace Kuch is a multi-instrumentalist who has had an amazing musical journey thus far in her life, just turning 13 years old in 2016.  She began with piano at a young age and played bluegrass mandolin starting at age 7.   After getting her first electric guitar at the end of 2013, she was called to the blues.  Ever since, she’s been on an incredible music pilgrimage, playing blues festivals and attending music camps across the country, even though she’s only in 7th grade.

In January of 2016, Grace performed for the first time in Memphis at the International Blues Challenge Youth Showcase representing the state of Colorado.  Experiencing such an amazing event, she knew that she just had to get back to Memphis so she assembled this stellar new band to accompany her.  With the Colorado Blues Society in support, this Grace Kuch Band was born.

Laine Ford found her "soul" instrument, the stand-up bass, at 12 years old.  She chose the biggest instrument in orchestra because she is so tall.  Fast forward though learning from the best bassist in Denver, polishing her excellent musical skills, playing numerous blues jams and gigs; she is excited to join the band.  Laine is a 14 year old 8th grader at Hamilton Middle School in Denver and also runs for the Denver Lightning Track Club.

Jordan Jamison's inner drummer was noticed by a man named John Catt at a Blue Star Connection fundraiser, when she was banging on the table with her fork and knife. He saw the spark and she was gifted her first drum set. Three years later, she has graced us with her talent at many jams, festivals, and concerts, throughout Colorado. She has earned the nickname "Stixx" and definitely lives up to that name! She is looking forward to the future and is very excited to be a part of the band. She is an 12 year old 6th grader at the Rocky Mountain School of Expeditionary Learning and she also trains in Brazilian Jiu Jitsu.

These ladies have the blues in their souls.  Grace’s natural smooth style aligns with the advice of many mentors, say more with less.  Laine will charm the masses with her groovy bass lines and killer smile.  Jordan brings the fun and flair all while keeping grounded.  It has been a wonderful music journey together and we look forward to watching these ladies explode in Memphis.

In the Spring of 2017, the journey continued with the exciting addition of Keyboards to the band!  Welcome Eric Jones, 14 years old, to the group, his boogie-woogie stylistic play adds a perfect new dimension to the Grace Kuch Band sound! 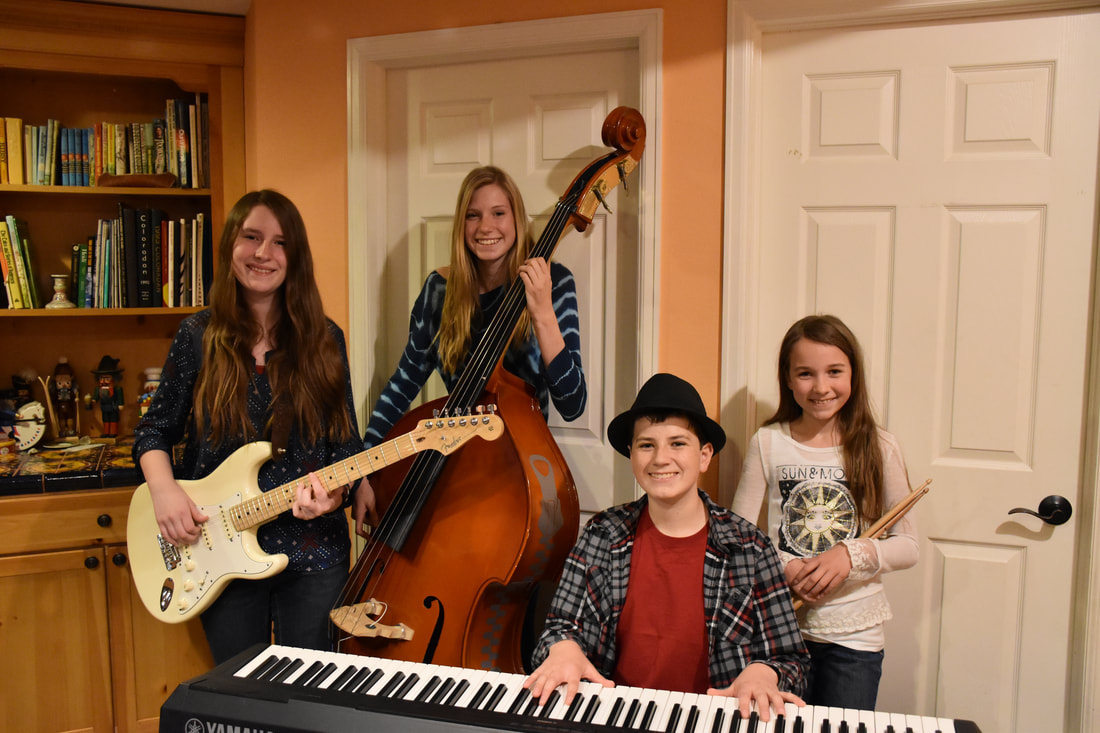